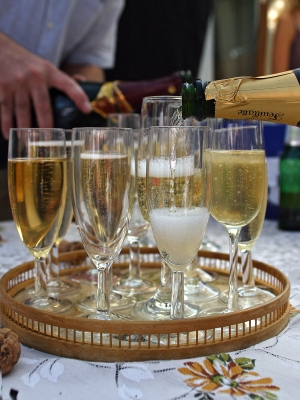 It’s the midway point between Christmas Day and the New Year that is the most daunting of the festive period.  For many, there will be the inevitable leftovers of Christmas dinner to polish off. And for others there will be the repeat dinners at the homes of in-laws and aunts and uncles that not only require making room for yet more turkey and yet more bread sauce, but monotonous motorway journeys and interminable conversations with Uncle Harry about the current status of his gastrointestinal plight.

While the indulgences of Christmas itself are now a fuzzy memory, you know that there will almost certainly be yet more to come on New Year’s Eve — if not before. So, if you are going to make it through to New Year’s Day with your dignity (as well as your liver) intact, you need a plan.

Rule #1: Don’t drink during the day

I can hear your cries; only a killjoy enforces a no-drinking rule during the day. But how many of us feel genuinely good in the morning following an entire day of indulgence? If you stay away from the booze until the evening you are at least giving yourself a fighting chance. While this is a good plan for New Year’s Eve itself, it also applies to the entirely of the festive season. Everyone has that family member who starts sipping the whisky from 11am each day over Christmas. Just ask yourself, do you want to be that person?

In many ways this is connected to the first rule. The festive period is a marathon, not a sprint, and the opportunities to revel are plenty. But if you have any intentions of remaining upright and conscious at midnight on NYE, you might want to sip your drinks slowly rather than guzzle them as though it’s your last day on Earth.

For some, this can prove challenging. I recall one New Year’s Eve when a friend of a friend clocked my bottle of Irish whiskey, apparently his favourite, and chugged it as though it were Powerade. On the same night, someone who had been drinking neat spirits out of a pint glass ended up lying prone in the middle of the street with traffic having to divert around him. Hint: If you’re already slurring your words before 8pm, you’re doing it wrong. No really, you are.

One the best things I did this year was to sip my drink slowly and stop drinking wine midway through dinner at my company’s Christmas party. By the time the event ended and I headed for home, it was almost as though I hadn’t drunk anything at all. If you have any hope of lasting until the wee hours of New Year’s Day, there’s no harm in putting the drink down for a while.

This is perhaps the most important and was the inspiration for this blog. Looking back at every celebration that ended in pain, a key component of my undoing has been mixing the wrong kind of drinks at the wrong time. Most of the time, this undoing was caused by the (over) consumption of some form of sparkling wine following an evening of drinking more than enough still wine, the only outlier being an ill-fated decision to knock back an after-dinner espresso martini a couple of months back.

Let’s not skirt around the issue: sparkling wine can and will get you drunker faster if decided to mix it with other drinks. While often regarded as a myth, there is some evidence that carbonated alcohol, such as Champagne, accelerates inebriation.  Anecdotally, I would agree. Sadly, this sort of reaction does not bode well for New Year’s Eve if preferred drink for midnight is Champagne or one of its analogues. There is also some evidence that beer or another other fizzy alcoholic drinks can have the same effect, but I can say from experience that the only culprit for me is sparkling wine, whether English fizz, Cava, Champagne or Prosecco.

Your liver typically process one standard drink per hour. The quicker you knock them back, the harder and longer your liver has to work after you drink. Growing up in Canada, the typical night out didn’t start until well after 9pm, which usually meant having a sensible dinner earlier in the evening. Upon moving to the UK in my mid-20s, I quickly realised that priorities were much different as nights out usually began straight after work. Anyone in the UK who has Canadian or American friends knows what I am talking about.

The  fact remains that your body absorbs alcohol more slowly following a meal, up to three times slower depending on the type of food consumed. Think about it; that can make all the difference between a romantic midnight kiss with your significant other at midnight or making an unsuccessful and embarrassing pass at your best friend’s sibling. 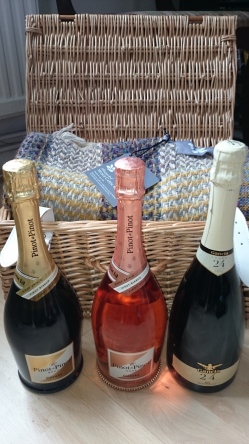 It’s difficult to remember a time when each day of the week didn’t have a cute name that encouraged us to drink wine. As though we needed additional excuses to imbibe, social media has hastened the spread of such occasions as Wine Wednesday or Thirsty Thursday.

Before it became fashionable to get tipsy mid-week, Friday was the day when the floodgates would open. No special name required. Friday was the word.

In this era of alliteration, simply calling it Friday would not do. But what in the wine world will match Friday? Fetească Regală Friday? I think not. I could see there being a Fino Friday, but you won’t want to drink too much given that it’s 15% ABV.

Helpfully, the British have an insatiable thirst for sparkling wine and Prosecco in particular. Last year, Prosecco overtook Champagne as the favourite fizz of the UK. Sales of the Italian sparkling wine soared to £182-million compared to £141-million for Champagne. Overall, volume sales for Prosecco amounts to 21-million litres in 2014, with Champagne at 6.5-million and Cava at 13-million.

It didn’t take long for someone to name a day of the week in honour of all the sparkling wine we drink. Hence Friday Fizz. But before we all ventured off to Aldi for ration of Prosecco at the start of the weekend, I had a friend who was honouring Prosecco Friday with a pallet of bottles bought from a Mancunian discount store that sold it for so cheap that it made Aldi and Lidl look like Fortnum & Mason. So cheap that you’d be mad not to bathe in it.

Except the thing with most Prosecco is that it satisfies that desire for something fizzy, but it doesn’t do much else. And so it can be a real challenge to write anything profound other than to say it’s a crisp, fruity and fizzy means of delivering a desired amount of alcohol into my bloodstream. QED.

All of this build-up relates to the fact that, quite a few months back, I was sent a picnic basket containing a fairly useful wool blanket and three bottles of Italian fizz: two sparklers from Piedmont and one Asti Spumante. There was also a Presecco DOC for good measure. Sample bottles from Gancia — okay, freebies.

If you read Sediment Blog last week, you’ll know they forgot to taste the sample bottle they were tasting. I can say it’s easy to suffer the same fate. Because in this case, I’ve done exactly the same thing. First, I kept putting it off. I’ll review them another day, I kept saying. The problem is that, in my house, Friday Fizz almost always has a disastrous effect on my Saturday mornings. Opening a bottle of fizz is not the same as opening a bottle of Fino. You don’t merely have one glass and then stash the bottle in the fridge until the following day. No. Fizz is of the moment. Once those bubbles are released, their existence is fleeting. So you open a bottle, drink the contents and then wake up the following day feeling as though someone has hit you over the head with a mallet.

So. Those bottles from Gancia. The problem is that while I recall where those bottles went, I can’t recall the exact location of my tasting notes if any were written. The bottles in question were:

I hate to disappoint the folks at Full Fat PR, but my review has been nothing short of a failure. The fizz was superb, but I’ll be darned if I can muster precise tasting notes that go beyond preferring these bottles of Gancia to your garden variety Italian sparklers. It seems none of this will matter all that much, for even though the folks at Gancia announced a big launch into the UK last spring, it looks nigh on impossible to buy in the retail trade right now. Pity.