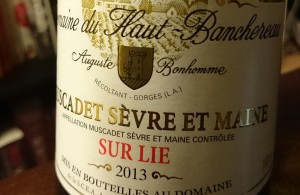 It is often said that wine drinkers these days are spoiled with choice, but surely the people who say such things have never ventured into a typical supermarket. The shelves may be heaving with wine, but how much of it do you actually want to drink?

Worse, still, if you have your mind set on buying something specific. Not esoteric, mind you. Just…specific. No problem if you are seeking pinot grigio, a generic bottle of Rioja or a a generic Kiwi sauvignon blanc. But think twice if you set off with anything particular in mind.

This was all brought into sharp focus this week as I set off on a shopping trip to buy one type of wine from as many retailers as possible. The wine in question? Muscadet.

Now, Muscadet has never really been considered a fashionable wine. Not like Chablis, which is synonymous with the 1980s. Nor pinot noir, which more or less had a starring role in a film. But with more and more wine drinkers, critics and sommeliers seeking greater value for money and food-friendliness, you’d be forgiven for thinking Muscadet would be among those in high demand.

Certainly, I am not alone in my thinking that the wine retailers would be awash with stuff. Rather than spend good money on premier cru Chablis, the masses would rather opt for a better value Muscadet sur lie, I concluded. And so it was on this basis that I set off in search of fine examples of this wine that would form the basis of a blind tasting for an upcoming blog. There would be one each from some major high street retailers, as well as from independent merchants. The premise behind the experiment? To see if what the big name Goliaths sell can come close to matching the quality of the small and nimble Davids.

The shopping trip started off with success. The nearest independent, Amathus in Leadenhall Market, came through with a bottle of Domaine du Haut-Banchereau Muscadet Sevre et Maine Sur Lie 2013 for £7.95.

This would set the price target. Can the big retailers deliver a better wine for the same price? Well. The concept was sound. The shopping trip was not.

The Tesco local to my office near the Bank of England had only the cheapest form of Muscadet available, from its lowly “Simply” range for £4.49. This would not suffice.

It was even worse at the Waitrose around the corner. Plenty of pinot grigio, sauvignon blanc and Californian rosé. But no Muscadet.

To their credit, when I tweeted about the City of London’s Muscadet drought, both Tesco and Sainsbury’s did their utmost to find out where it was hiding. Waitrose was unusually silent on the issue, but this is probably because their time is being monopolised by complaints about mouldy cherry tomatoes and conference pears from the middle classes.

So, after round one of the great Muscadet challenge but before a single bottle has been opened, the score is independent merchants 1, major retailers 0.