It’s time in the market that counts the most when trying to make a decent return on an investment, the experts say. This may very well work for equities and bonds, but when it comes to wine I’m inclined to say that not being in the market at all has been one of my best investment decisions to date.

If anything, I consider it redemption following my decision several years back to invest in a gold mining fund at a time when it was near its peak. One quickly learns the phrase ‘throwing good money after bad’ when faced with losses that exceed your age by a distressingly wide margin.

Considering that during my day job I’ve spent much of this week observing a bit of a meltdown (I’m sure I’ll eat my words over this) in the world’s financial markets, I decided that it might be fun to see how bad equity investors have fared compared to wine investors.

(Coincidentally, over at Sediment Blog there was also a feature on investing in wine this week, but you can rest assured that their piece is much more entertaining than mine and, mercifully, does not contain any charts.)

With my financial hat on, I decided to pull up some charts using data from Wine Owners and take a closer look at the situation.

The nifty chart below shows the performance of the S&P 500 (green line), FTSE 100 (orange line) and Wine Owners First Growth Index (blue line) in the three years to 4 October 2014 (the latest date for wine data). In terms of recent wine investment performance, it speaks volumes about how the market has responded to those over-inflated en primeur campaigns in recent years. 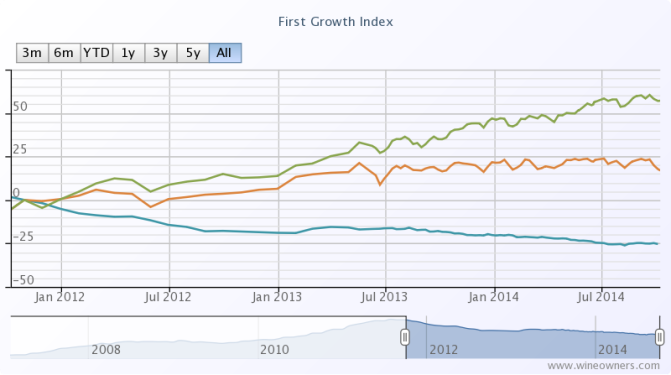 What we see here is a three-year loss in the region of 25% for investment-grade Bordeaux wine. This is in contrast to the approximate 18% gain for the FTSE 100 and 56% rise for the S&p 500.

I know where I’d rather have my cash socked away. And I know what I’d rather be doing with my wine: drinking it.

Of course, a little perspective does help with things and, as everyone knows, wine investment stretches beyond just three years. So here are the same indices over a five-year period.

See that little peak in the blue line? That looks eerily similar to the point at which I invested in that gold mining fund all those years ago. Lo, I have learned much of these many passing years.

But what if we looked at the data in a way that made it tell an entirely different story?

Thanks to the benefits of hindsight, we can all look back into the past and find a chart that will make us want to kick ourselves for not wagering everything on Lafite and Latour.

Like this chart, for example, which shows the performance of those same three indices between 31 January 2007 and 4 October 2014. 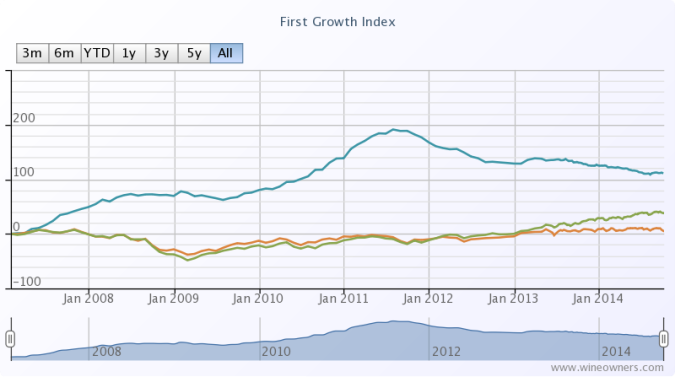 Thanks to its lower correlation to global markets during the financial crisis of 2008 (millionaires cut staff but not wine budgets, perhaps?) wine has grown by 110% compared to the rather weedy 5% for the FTSE 100 (not including the most recent meltdown) and the slightly more respectable 37.7% return for the S&P 500.

[EDIT: While wine had a ‘lower’ correlation to global markets, this does not mean it is not correlated. Indeed, a longer-term perspective of wine investment performance shows that wine is still correlated to global economic events and has experienced its own downturns during times of market pressure. Moreover, as an asset class it is not immune to peaks and troughs, and the value of wine can go down as well as up.]

So what does this tell us? Well, if you’re an equity investor who has been sweating bullets this week as markets around the world have dipped, rest assured that you’ve done better in the past few years than someone who invested in wine.

If you’re a wine investor lamenting your losses, hold in there and hope for the best. I’ll be sure not to tell you about how cheaply I’ve been buying 2010 Bordeaux lately.

2 thoughts on “Wine investing: Time out of the market”