Down the road from my house is a row of shops like so many others in Britain. It is lined with the obligatory small and shabby “supermarkets” and newsagents, their front doors flanked by wilting lettuce and shrivelling lemons.

It also has those take-away outlets that cook meat on a skewer, and those spartan cafés with harsh fluorescent lighting and melamine tables.

And then there’s the Sainsbury’s Local. It popped up a year or two ago, its slick signage standing out among the messy ‘supermarkets’ with the bruised fruit out front.

These days it isn’t fashionable to shop at major supermarkets like Sainsbury’s, but I confess I take more comfort buying from the retailing giant on this particular high street – mostly because I prefer to buy my food in date. And, let’s be honest, if I need an emergency bottle of wine, it probably won’t do me wrong. Right? Right.

Plus I swore off buying wine from random corner shops long ago. That was after a bottle of French white wine from a newsagent in Hoxton turned out to be the colour of iced tea and tasted mostly of mop bucket water. Never again, I said. 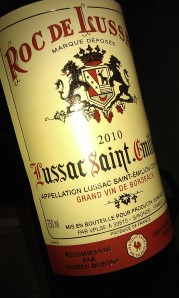 So when I was wandering the aisles of my Sainsbury’s Local recently, I couldn’t help myself when I spotted this bottle of Roc de Lussac Lussac-Saint-Emilion 2010 on the shelf.

Its label, with its traditional typeface and charming coat of arms, looked the part. It looked serious, traditional, well-made. What could possibly go wrong?

And that’s not all. It’s from the 2010 vintage, one that is widely regarded as among the best in recent memory. In which case we’re really laughing.

If you aren’t familiar with Lussac-Saint-Emilion, it is one of the satellite appellations of Saint-Emilion, lying on the right bank of the Garonne and Dordogne rivers. Lussac itself is a commune about nine  kilometres from Saint-Emilion lying among the vineyards. I’ve been there and can say it is a pleasant but tiny place with the requisite village bakery and corner shop – and little else.

The wines from Lussac and the other satellites, such as Montagne and Puisseguin, are made in the image of Saint-Emilion but overall they are considered to be of lesser quality and, therefore, are mostly cheaper to buy. Perhaps it is the terroir. Perhaps it is something else.

Nevertheless, knowing the satellites are a great place to find value Bordeaux I thought I couldn’t possibly go wrong with Roc de Lussac.

Here is a tale about supermarket subterfuge. As they say, what you don’t know can’t hurt you. Or even better, as Donald Rumsfeld, former US secretary of defense, once said,

As has been written about so many times recently, supermarket discounts are rife. It would be fair to say no wine sold at a supermarket for 50 per cent off its full price is ever actually worth that ‘full price’.

For £7.99, Roc de Lussac is perfectly serviceable, if still a little more than I would want to pay. Not great, not complex, but correct to its grape variety and very obviously a right bank Bordeaux. But it did have a slightly unpleasant dusty – almost chalky – side to it, a texture common to wines that are made with oak chips.

Of course, the big giveaway this wine was never worth more than a bottom-shelf red was the final line on the back label, which read, “Ready to drink now or will last for up to 3 years from vintage date if carefully stored.”

Considering it spent most of those three years in a warehouse or standing upright in a supermarket, I am left wondering how it is physically possible for this wine to be “carefully stored” at any point in its life.

And I can’t help but think £15.99 is highway robbery when I could buy Chateau Labat or Caronne Ste Gemme – both considered genuinely great-value  – for at least £1 less.